The first published history of the congregation, The Church at Horseshoe Bay and the Traditions from Which We Come, was prepared by Vera Campbell in 1997.  It covers the period from 1982 to June 1996.  We have duplicated the text faithfully on the pages that follow.  The original manuscript version prepared by Campbell had color photographs, while the print version, published for general circulation, substituted black and white photographs and placed them at the end of the text.  We have used the original color photos in this online version, and have placed them in the text associated with the topic they illustrate.  This book is organized in three parts as follows:

Part I:  The Beginning of Horseshoe Bay and Organizing the Protestant Church

This part covers the years 1970-1989 and encompasses the pastorate of Rev. Thomas Campbell.

These parts cover the years 1989-1996 and encompass the pastorate of Rev. Kenneth Forshee.

The print version of this book contains Addenda A through W, which are primarily tabular information and reproductions of documents significant to the life of the church.  These addenda are not currently available for display on the website, but can be viewed at the church office.

The Traditions book is supplemented by a collection of photos, newspaper articles, etc. that record the ongoing life of the church for the years 1982-1996.  This collection is archived in ring-binders located in the church office.

In 2002, Camille Bigham prepared a series of annual histories that pick up in June 1996 and bring the history forward through the end of her service as a Trustee in 2002.

The narrative history for these years is also supplemented by a collection of photos, etc. archived in the church office.

In 2007, as preparation began for the 25th Anniversary of the Church, Beverly Brascom and Camille Bigham teamed up to complete the record, filling the gap from 2002 through 2006.  Subsequent to 2006, the church history has been recorded as a series of annual reports, as follows:  The narrative history for all these years is also supplemented by a collection of photos, etc. archived in the church office.

In 2016, Office Manager DeDe Hodge, in collaboration with Don Eckelbarger and Ward Lott, began the creation of an annual Digital Scrapbook.  These Scrapbooks are meant to capture the photos, newspaper articles, etc. that record the ongoing life of the church.  These Digital Scrapbooks are available on the website only

The second published history of the congregation, An Illustrated and Interpreted History of The Church at Horseshoe Bay, was prepared by Jim Jorden in 2018.  It covers the entire period of the church’s existence from 1982 through 2017.  A digital version is not yet available on the website, but printed copies are available for purchase at the church office. 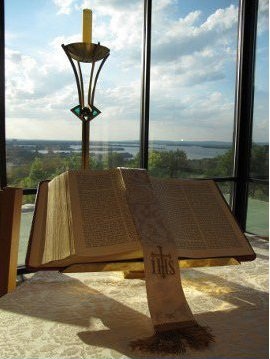 The Church at Horseshoe Bay exists to be the arms of Christ by sharing the Gospel in our community and the wider world with love and compassion.